Merrill 2007 "Style 7 plus" Harp Guitar
Has physical and visual defects, but you may not find a better sounding instrument at any price.

For those newly shopping for harp guitars or who haven’t followed my 14 years of Harp Guitar Music listings and sales, this one has a bit of story. If you’ve been fantasizing for $15k tone and quality, but just can’t afford it, you might find it rewarding to read the whole entry (as you may find you now can afford it!).

Like any fine acoustic instrument, it needs to be heard in person to be fully appreciated. You can hear recordings of it played by the current owner on his original song here, and you can hear it on two of my Norwegian Wood tracks: #13 and #24. And it’s the instrument played by Andy Wahlberg on my Harp Guitar Dreams compilation! In my opinion, none of the recordings fully capture it. Prospective buyers please familiarize yourself with all specifications below; this, like a vintage Dyer, has a wider neck than many modern instruments.

The instrument was finished in 2007 and shipped in a Cedar Creek hard case. Oh, those pesky “accessory compartments”! Case builders forget that the inside of the instrument’s hollow arm is touching the corner of that lightly-padded wooden box – it doesn’t take much of a shock in shipping to thus push on and crack the arm (I’ve seen two Merrills damaged the same way). The arm was decently repaired, after which Andy Wahlberg borrowed it (thus playing it on our 2008 recording). The owner listed it on eBay, where it had no takers (the cracked arm apparently scaring everyone away). I later negotiated with the owner and it wound up in my inventory. That was when I discovered that – not only was the damage something I could easily dismiss (the repair is cleated inside, rock solid, and doesn’t look too terrible outside) – but the instrument was unique, its tone unbelievable. I attributed this to the special attention lavished on it by Jim Merrill, including his first use of Larson-style laminated braces (which he would do only once more, on my later #18 commission).

It seemed irreplaceable, and I could hardly bear to sell it – and so I priced it fairly but firmly at a then-hefty $8250. It sold quickly, leaving me devastated (the artist me, not the business me!). That was in January 2009. The buyer, Jesse Lepkoff (singer/songwriter, guitarist, recorder & Baroque flute player) kindly let me keep it for a month while I recorded a couple new tunes with it (which I’d later include on my CD).

He’s used it very sporadically since, keeping it in a climate controlled display case. We re-listed it briefly in 2015 due to its being seldom played, but like me – he couldn’t bear to part with it! So we pulled it. Now, five years later, his focus has further moved on to other areas, and it’s time to try this again. Needless to say, I consider this a rare, and great, opportunity.

The price has been further lowered for the additional finish cracks. His latest photos show these (in worst-case lighting; they become invisible under many conditions). All other photos are my original 2008 images including the arm damage and a back scuff blemishes. It will ship from Jesse’s home in Vermont, while the buyer is protected by my 48-hour approval period (I want you to love it as well).

Jesse opted for one of my custom HGM Colorado Case gig bags and super-lightweight CaseExtreme flight case (corrugated plastic), so it will ship from Vermont in those. He never used the Pick Up the World electronics it came with, but just plugged it in and said it sounds fantastic (as it should!).

*“Your results may vary” 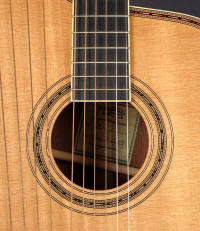 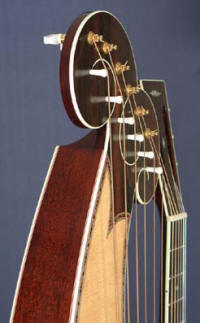 On consignment, not on premises